Category The Ugly: Anti-Tourism in Barcelona 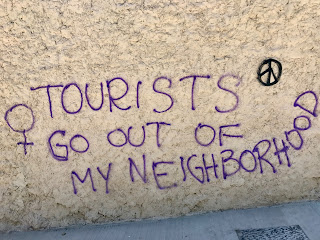 Barcelona is, like a few other Spanish regions, in the throes of a real zealous anti-tourism movement theses days. One constantly runs into “Tourist Go Home” posters and graffiti around town. Rising prices on rental apartments, congestion in popular spaces and noise level all contribute, and are reasonable concerns. However, the level of xenophobia and political laziness that shine through in the discourse make it hard to sympathize.

There’s a genuine concern regarding housing prices being pressured from many angles, but that is just the point, many angles! In fact, new research from the consultancy agency InAtlas shows that vacation rentals has no measurable impact on rental prices in Barcelona. The recurring argument contra the tourism industry in Barcelona is this, vacation rentals drive up prices and drive out the locals.

Personally, I’m all for regulating tourist licenses etc. in pressure neighborhoods, taking steps to preserve authenticity and ensure a vibrant city center makes perfect sense. A “Disneyfication” of this city benefits no one (except the usual global brands). However, one will not achieve a sustainable politics on tourism based on the wrong facts or on promoting regressive measures  like stopping advertising or introducing (more) taxes on tourists visiting the city. 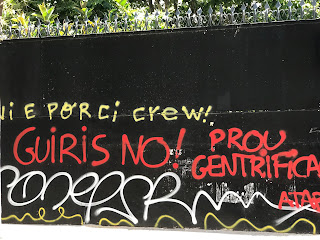 So, what’s the real issue then for the anti-tourism movement; xenophobia, misplaced ideology or ignorance? All of the above I suppose. When you read “No guiris” on walls, that doesn't exectly spell out tolerance. “Guiri” is a derogatory term for Europeans, especially from Northern Europe. No doubt “incidents” (mainly) featuring drunken tourists don’t help, but really there’s no excuse for the use of derogatory terms.

Ideology, then? I confess to being a lefty myself, but the blind resistance to any type of gentrification, normally on the political left, seems completely reactionary to me. Large parts of the center of Barcelona has been in dire need of improved infrastructure and general standard of housing. It’s a complex political and fiscal process to do this well; to respect the architectural and demographical history of an area while renewing. However, a by default resistance to the process in itself is a knee-jerk opposition to progress.

Ignorance is bliss, or in this case, breeds contempt. Much of the arguments by the anti-tourism movement is based on ignorance. This, in part, because it serves certain politicians. If you can blame tourism for all housing issues it’s great tactic for diverting attention from failed politics in other socio-economic areas.


is another slogan winner, although it’s hard to see what negative effect tourism might have on the ability to receive refugees. In fact, tourism contributes to 15% of the gross national product of Spain. I wonder how much zeal there would be to receive refugees if you cut the GNP with 15%?

Lately, things have taken a turn for the worse, including violent attacks on tourist buses, bikes etc. led by the Arran organization whose mix of (Catalan) nationalism and use of violence has some historic predecessors that give any democratic minded individuals the chills.

In fact, I'd argue that history shows that the "...Go Home!" (fill in the blanks)  slogan has never been used by open-minded, progressive individuals. It's the last resort of the bigot, and I'm not sure that those who spray paint the slogan around the city would be comfortable with the historical company they're in.

It’s pretty amazing that the number one concern for Barcelona inhabitants in 2017 isn’t unemployment, nor littering, pollution or lack of security, but tourism! Admittedly, the congestion represents a real problem, certain areas have serious issues with noise and crowds and would benefit greatly from a sensible plan to regulate the influx of tourists.

A well-structured plan to keep tourism in check, by all means, but please stop this “Tourist go home” nonsense, you’re embarrassing yourself, the region and the amazing city that is home to people from all walks of life from across the globe!